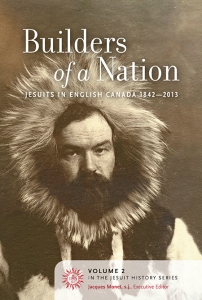 The cover of Builders of a Nation has a burly, bearded man in a furry parka and coat, who looks directly at the reader in a challenge. He looks exactly how you’d picture one of the early explorers to the North Pole, trudging through the snow in their snowshoes and riding on dogsleds. He looks like he could wrestle bears.

These books aren’t adventure stories, though—not quite. Teachers of a Nation and Builders of a Nation are the ideal books for research, for archives and libraries. The writing style is calm, formal and academic, lightened by good humour and faith. They’re both written by a committee of Jesuit authors: Fr. Joseph Gavin, S.J., is the author of Teachers of a Nation, while Fr. Jacques Monet, s.j., serves as editor of each volume. Each one of them is committed to covering Jesuit history in English Canada as thoroughly, clearly and correctly as possible.

The books go into detail about parishes and schools across Canada, and the finer points of their administration. From St. Mary’s College in Montreal to St. Paul’s College in Winnipeg, from St. Joseph’s Parish in Chatham to the Immaculate Conception Parish in Vancouver, each institution gets a spot in the limelight. Both of the books talk about finances, enrollment numbers, city planning and school curricula.

And in between the archived correspondence and footnotes, there are pictures of priests playing archery games with kids and working together to beach a canoe. The books include stories of fires, quarrels, a mysterious death and accounts of the Canadian Martyrs.

Most of all, as you read through each book, what becomes clear is the strong sense of community Jesuits have with each other. The same names show up over and over again, and you start to get a clearer idea of their personalities: even when the administrators and rectors of this book argue, grouse and complain, they’re described as and talk to each other like old friends. In the introduction, when the authors define ‘community’, they point out that “[according] to Canon (Church) Law, there had to be three or more Jesuits living together… although more recently only a two Jesuits can be declared to form a Community.” Judging from the tone of their writing, this seems about right.

Teachers and Builders of a Nation will be launched later this month on April 23rd at Regis College (100 Wellesley Street West) in Toronto, from 4:00 to 7:00 p.m. Come out to read the books, and to meet some of the authors and the Jesuit community—you’ll see what I mean when I talk about their sense of fellowship.