What I remember most were the crowds. They were so polite and well-behaved. Despite the fact that they were hungry, and exhausted from standing in miles-long lines, having travelled hundreds of miles, they remained smiling and courteous.

I’m talking about the week after the death of St. John Paul II. I was in Rome to cover the funeral for Catholic media in Canada and the United States. Those memories came flooding back this week as we celebrated the 10th anniversary of his death.The 10th Anniversary of the Death of JP II

But back to 2002 and the streets of Rome. The pope was lying in state in St. Peter’s Basilica. A line of people paying their last respects snaked from the entrance to the basilica, through the plaza, down the Via della Conciliazione and then in a couple directions throughout ancient Rome. It went on forever; there were probably a million people, waiting patiently, some for several days, just for a final glimpse of the man they revered.

Throughout that week up to and including the funeral, they prayed, sang, laughed, reflected, mourned and simply kept vigil. On the day of the funeral, they unfurled banners saying “Santo subito!”, “make him a saint now!”

The experience of being with these mourners drove home to me what a lasting and personal impact this pope had on the lives of millions of Catholics around the world. His mantra to all of us was “Be not afraid!” It was such a necessary exhortation at a time when being a faithful Catholic was becoming increasingly disdained by society. To be Catholic at all required courage. And John Paul II had it in spades.

St. John Paul II, pray for your children: Help us to have courage and faith always. 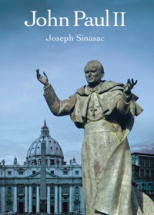